Jeff Kottkamp, the 17th Lieutenant Governor of Florida, discusses how the private commercial space industry, together with bio-tech and life sciences, are transforming Florida’s economy before a February 23, 2021 meeting of The Economic Club of Florida. 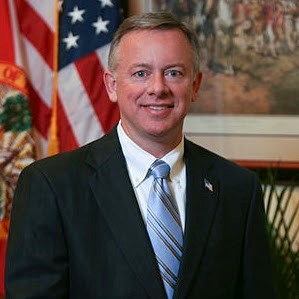 While agriculture, together with tourism and the services industry that supports it have long been the pillars of Florida’s economy, targeted economic diversification that began 20 years ago is now transforming the Sunshine State.

When Jeff Kottkamp became Florida’s 17th Lieutenant Governor in 2007, part of his responsibility was serving as Chairman of the Space Florida Board of Directors.  After the federal government cancelled the Constellation Program to Mars, Florida’s Cape Canaveral faced a very uncertain future, with the space shuttle program soon ending, too.  The state, through Space Florida, decided to create the Space Exploration Technologies Center to encourage private commercial space firms to locate to Florida and use the Cape.

“Bringing SpaceX was the beginning of something really exciting here in Florida and now we see Blue Origin and a whole host of other companies, also in the commercial space business and Florida is the place for commercial space launch in the world,” Kottkamp told Club members.

Similarly, Florida’s efforts to become a new hub for bio-tech and life sciences research that began in the early 2000’s is also paying off big now.  Kottkamp noted the early effort to create the first U.S.-based Max Planck Institute for Neuroscience here in Florida created synergy that’s produced similar scientific endeavors.  These include gene research at the University of Miami, Alzheimer’s research at the University of South Florida, and a recently-penned deal between Florida State University and the Mayo Clinic.  The University of Florida Shands Health System is using stem cell research that has shown signs of not only stopping the advance of the degenerative Parkinson’s Disease in patients, but actually reversing its debilitating effects.

“It’s enormously exciting.  And when you chart this, you see that now Florida has developed its own research triangle in bio-tech and life sciences.  It’s a transformation in the economy,” Kottkamp said.  To support these efforts, he told the Economic Club of Florida that “we need to focus on our children and their education, which is our future workforce.  It all starts with workforce.  What does business need in its workforce and then how can we best fulfill those needs in our schools, colleges, and universities?”

The Economic Club of Florida podcast, provides an extended platform for discussion to educate, engage, and empower citizens on important economic, political, and social issues. Based in Tallahassee, Florida, the Club has featured distinguished speakers on engaging topics of national importance since 1977. To learn more, including how to become a member, visit www.Economic-Club.com or call 850-906-9226 or email mail@economic-club.com. Date of recording 2/23/21. © Copyright 2020 The Economic Club of Florida, All Rights Reserved.